Among all subgenres of horror films, I find the slasher-type not only the most terrifying, but also the most thought-evoking. Aside from feeling scared, what else do i get from this type of horror movie.

Graphic slasher films from the 1960s Psycho to the latest 2018 Hell Fest continue to attract a considerable number of viewers. The thing about slasher killers though is that such individuals exist in real-life. This made me wonder how I wiĺl react, if ever I encounter one face-to-face. Another thought on which I pondered are the traits and characteristics of the victims, particularly that of the final character who will alter the turn of events.

Examining My Fight or Flight Response

People have different responses and reactions to horror films. Some cringe and cover their eyes once they hear the ominous and foreboding background music. I too have that same tendency, but then I refrain from doing so because I want to exercise control over my reactions. In a way, I can keep my mind still, in order to focus on what is about to happen.

Remember the “fight or flight response” ? If I run at the first sign that a brutal scene is about to happen, then I guess my flight hormones overpower the fight hormones. This may be good because my first reaction is to distance myself away from danger as far as possible. But then, what if I am in a flight-less situation or position, will I just freeze and scream for help? Do I have the courage to put up a fight?

Learning from the Characteristics and Actions of Victims 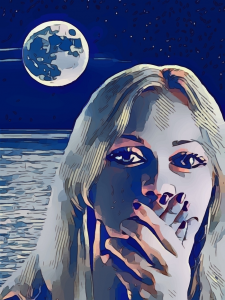 Throughout a slasher film, one gets to have a glimpse of the characteristics of the killer’s victims. Except for the final victim, the rest often demonstrates tendencies to court trouble or danger. In examining my own proclivities, do I also do the things they do? Do I give in to peer pressure, whilst throwing caution to the wind? Do I find it exciting to venture in strange, unfamiliar places? Do I consider it fun to defy authorities or heed warnings?

In slasher movies I have seen, it is only the final victim who demonstrates the correct fight or flight response. I decided therefore that if ever i find myself in the same situations, I will fight off or at least try to stave off the knife with whatever is on hand.

I looked around my room and saw 2 possible objects to use as protection, my pillow or my bean bag chair; or whichever is easier to reach. I imagine the bean bag chair to be better, as it is wide enough to offer bodily protection. If my assailant gets to slash the chair, the bean bag filling may spill and may even cause my assailant to slip and lose his footing; perhaps even give me the chance to smother him with whatever is left of the chair.

The point I am driving at is that in watching those slasher movies, I get to practice on how to control my fear and reactions. Instead of focusing on the gore and violence, I will myself to think of ideas, centered on sensible actions to take, or to avoid if in case I have to deal with similar situations.

There is Something to Learn from Slasher-Type Horror Films
Tagged on: Horror Films    Slasher Movies
Harding Jaymes January 16, 2019May 26, 2019 Blog